We were lucky enough to be in Dublin for the Millennium Anniversary of the Battle of Clontarf! They have held festivals and reenactments for this celebrated event in ancient Irish history before, but 2014 is the 1,000th anniversary!!!?!! 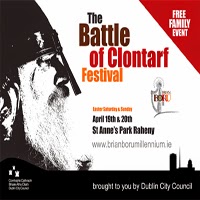 The Festival and Reenactment took place at St. Anne’s Park in North Dublin, on the coast of the Irish Sea, not far from the actual site of the battle, still named “Clontarf”. We walked from our hotel in City Centre across the River Liffey and caught the #32 bus, dedicated to the Clontarf festival all day Easter Sunday. The park itself was really big and had several large grassy areas for sports and gatherings. We had collected and counted our Euro coins the day before, as we thought the buses wouldn’t take bank notes, only change or travel cards. (We were right, because a sad French couple standing in line waiting for the bus with us were denied access because they only had Euro notes.)

The event was the largest battle re-enactment ever in Ireland. There were warriors from all over the world, and they were all very dedicated to recreating the battle for this special anniversary. They had a Viking village set up where the participants had been living for several days, as the real Vikings and Celts would have lived a thousand years ago. There were craftsman and women displaying their wares and demonstrating how to do their crafts; from woodworking to weaponry, textiles, and pottery, just to name a few. There was a falconry demonstration we watched that was really mesmerizing as the falcon flew in swooping circles around and out of the center field. We stopped to watch the “Strongest Viking” competition. These huge muscle men were carrying two 350 pound “bullets” (looked like torpedo-shaped barbells with handles welded on to the side), one in each hand – for a total of 700 pounds!!! It was wild, but after a few of them fell down and looked injured, we left that showcase. (There were several other challenges they had yet to face, but we’d seen enough.)
Here’s a picture of the competition area. 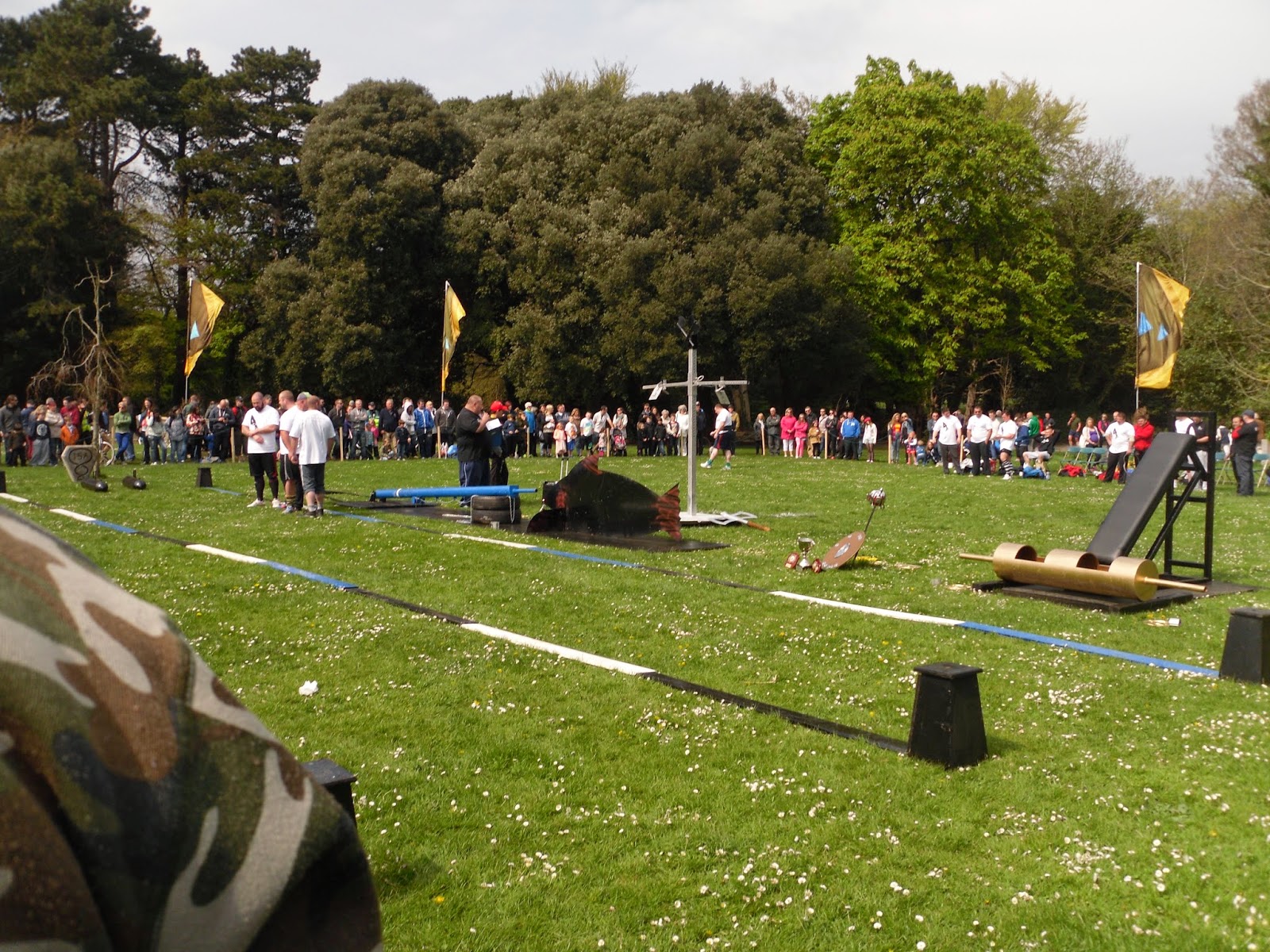 There were about 40,000 people at the festival with us, and it was pretty crowded, but only bothersome when we all crowded around the perimeter of the battlefield. There were so many warriors and it was a full-on fight to the death with broadswords, battle axes, short swords, spears, clubs, maces and shields, as well as a few other weapons I didn’t recognize but which were all  being brandished with gusto! By the end of the main fight, the field was covered with bodies, mostly playing dead, some still writing in hyperbolic agony (awesome). The story of the battle was concluded with the heart-wrenching tale of Brian Boru, the aging but fearless leader who saw his army defeating the invaders only to lose his life through an act of supreme cowardice by an evil Viking, sneaking into his tent as he was praying his thanks to the gods for the victory. 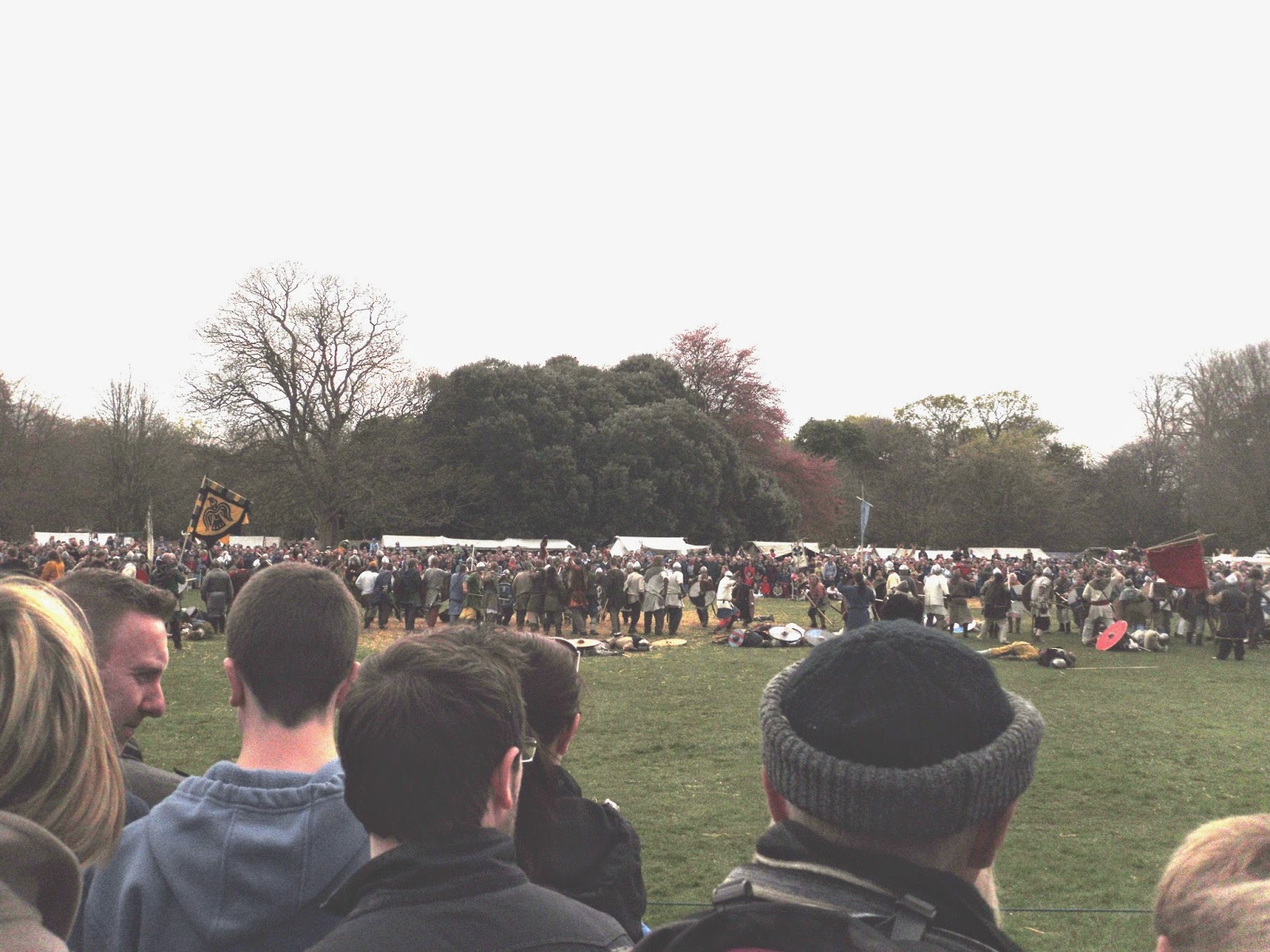 After the “dead” had been removed and the fighters returned to their tents or the special “Vikings Only” area, 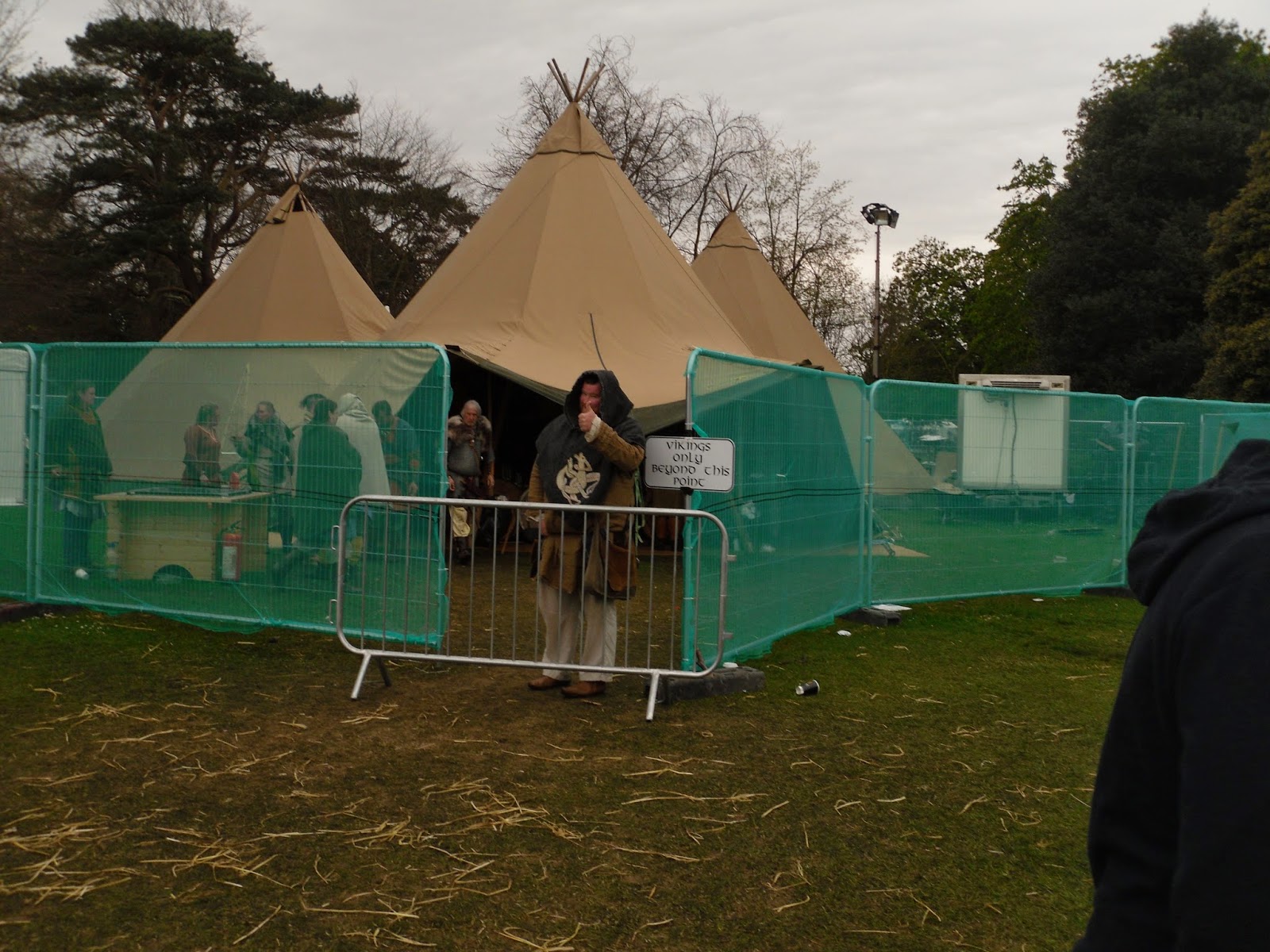 we wandered around to see demonstrations and eat lunch. We managed to find a booth with Kenyan food (weirdly suitable to the day’s theme to me, for some reason I can’t explain) and had “Moong Beans” with rice and vegetarian Samosas. It was chilly and misting rain, so the warm lunch helped perk us right back up! 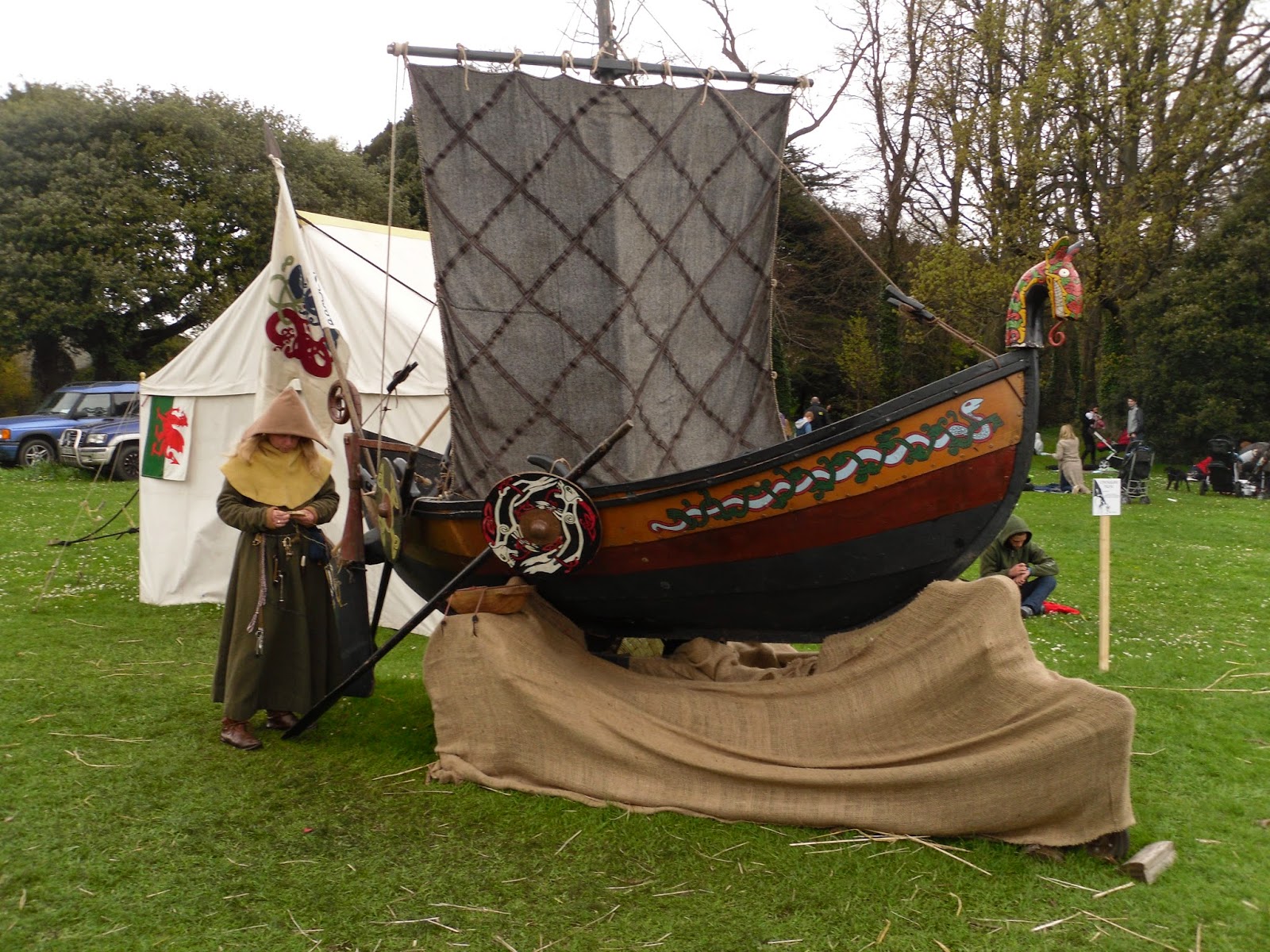 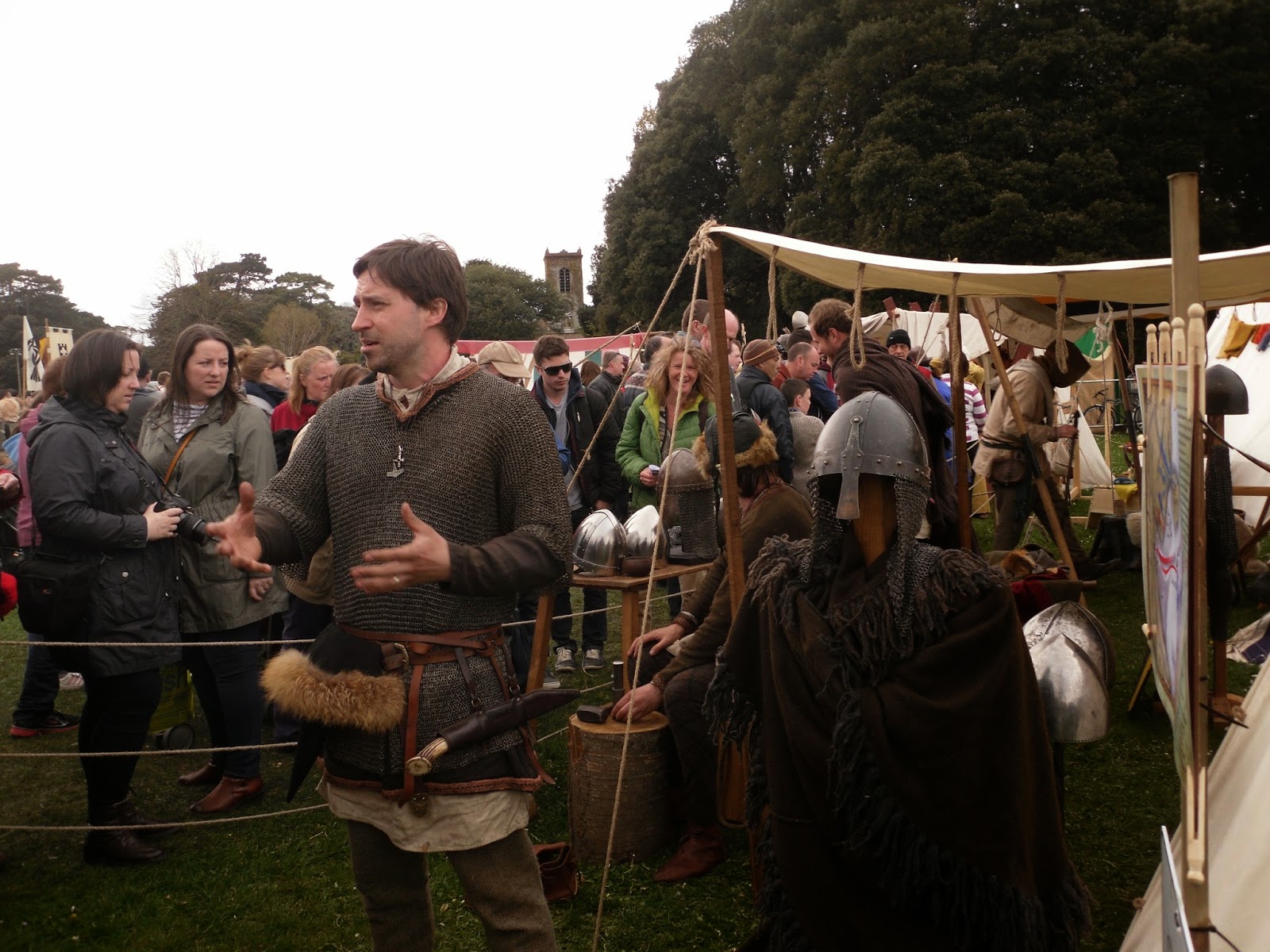 We made our way back through the park to the neighborhood bus stop and returned to Dublin’s City Centre, where we explored the Temple Bar area – Pubs, nightclubs, restaurants, and generally hipster central. Talk about time traveling 1,000 years in a matter of minutes/culture shock ~ Altogether an amazing day in the Ireland of today and April 1014.